Final Excursion Of the J-611 On The Peavine Line! 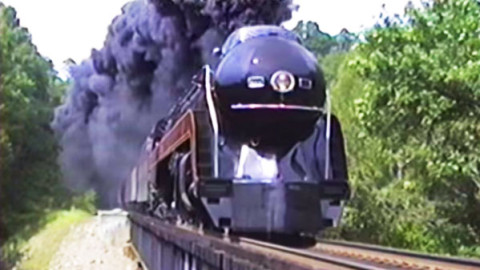 When Norfolk and Western built this locomotive, they had one thing in mind.

Make it sleek, attractive, and most of all powerful!


Although this is a longer clip, the J-611 displays her power as she is captured on her journey with her distinctive maroon and black markings.

Half way through you can witness some massive black smoke as she traverses a grade prior to going over a trestle on her way between Cincinnati to Portsmouth in 1994.

This was to be the final excursion over the Norfolk and Western’s now defunct Peavine Line.


At 50 MPH, she was rated the most powerful locomotive ever built in terms of actual drawbar horsepower.

The “J” (as she known) can propel a 15-car, 1015 ton passenger train at 110 MPH on level track. She also has the largest combustion chamber and firebox of any 4-8-4 ever built. The “J” used high quality coal in her firebox.

The Norfolk and Western initially built 14 of these Locomotives in the “J” series starting with locomotive number 600. Unfortunately, the “J-611” is the only one of these engines left.

If youâve ever taken a ride on the Norfolk and Western J-611 or was able to see her pass by, let us know in the comments below! Would love to hear your experience about the heritage locomotive!