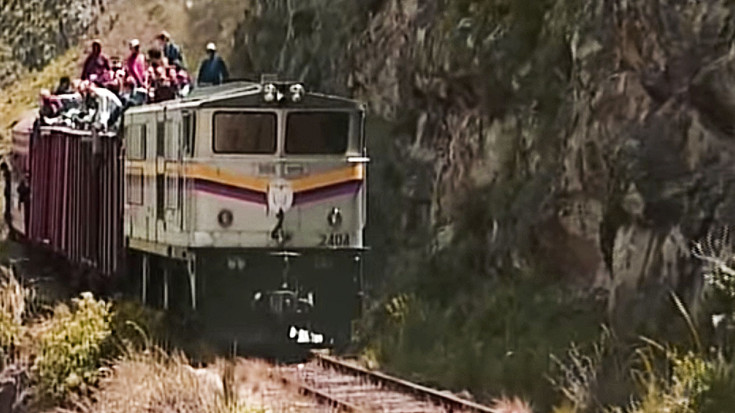 Sitting in the Andes Mountains, Ecuador’s first railway was dubbed “The most difficult railway in the world”!

This has to be way dangerous! Passengers actually are allowed to sit on top of the railcars!

Ecuador’s most popular rail trip is in a remote area known for its emerald mines.

Originally built 1899 to connect the coastal city of Guayaquil with the capital city of Quito in the highlands, the railway had many tough obstacles to overcome. Not the least of which was this vertical mountain called El Nariz del Diable (the Devil’s Nose).

The Devil’s Nose portion of the track was engineered with zigzag switchbacks in order to climb the steep Rio Chanchan canyon walls.

The track has a 45 degree grade or rises 3 feet for every 60 feet of length!

Note: at 7:15 into the clip, you can the train acutally derails and you can see them put it back on the track!

The train goes up on gradient and then backs up to a flat track that allows to take the next uphill gradient….zigzagging all the way to top!

The engine used is a 1992 Alsthom electic unit in a BO-BO-BO wheel arrangement to give it a total of 6 driving axles with 2 wheels each.

The Devils Nose climb represents a total of 2400 vertical feet on a 3 ft 6 inch gauge track.

Let us know if you have ever had a chance to take this exciting breathtaking excursion. Is it really as dangerous as it looks?