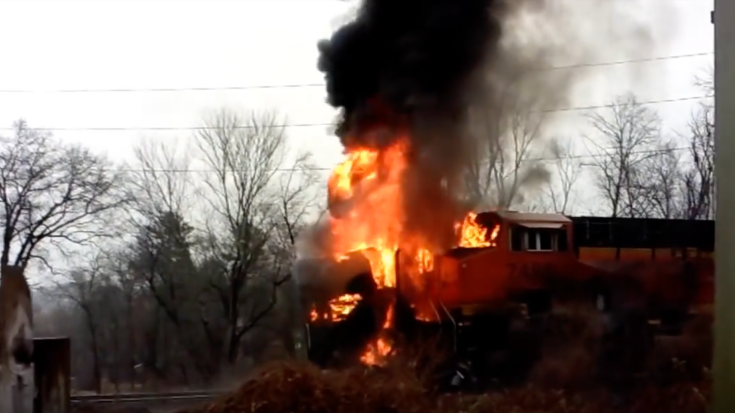 Surprised onlookers are helpless to do anything!

Fire burns furiously as surprised onlookers try and figure out what to do. The seen of this mishap was West Nyack in Rockland County, New York.

As it turns out, the driver of the transport truck tried to navigate the unprotected grade crossing with no safety gate system. The two train conductors both saw what was going to happen and could not stop in time.

After blowing the horn numerous times, the collision occurred and the truck driver was thrown from the cab and the truck burst into flames.

The local police first on the scene seem really frustrated not knowing if anyone was still inside the truck or the cab of the locomotive.
The fire was far too intense to get close.

Fortunately, both of the train conductors got out safely before the cab was engulfed in flames and were not injured. The truck driver survived and was taken to the hospital with serious injuries. The truck was transporting five cars and a motorcycle.

The volunteer fire department finally put the blaze out with only two of the five cars destroyed and minor damage to the motorcycle.

Let us know if you think unprotected grade crossings should be a thing of the past. We would love to hear your opinion!