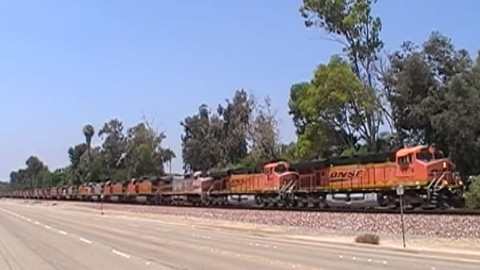 A rare catch as a “consist” of 30 locomotives put on quite a display!

Sprinkled in with the GE Dash 8-40CW locomotives are a couple of Santa Fe engines still painted with their “war bonnet” paint schemes!

This consist (meaning formation) is using two powered units in front (GE ES44DC’s) and two DPU‘s (distributed power units) at the rear. All of the rest are DIC‘s (meaning dead in consist or in formation).

All of the locomotive units are weighing in at approximately 400,000 pounds giving the train a total of 12,000,000 pounds of weight!