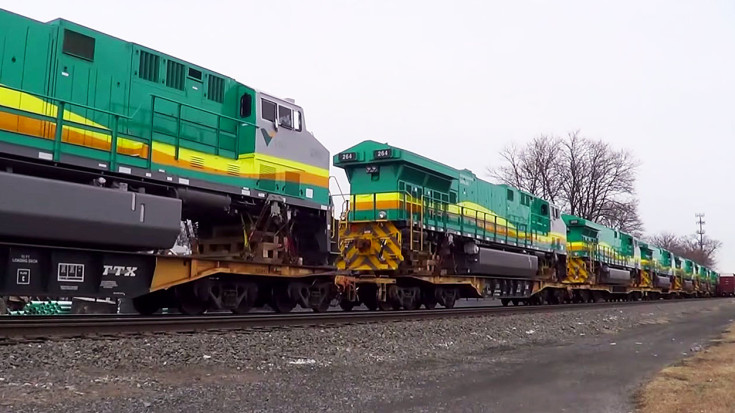 Talk about beasts, these 14 GE ES58ACi locomotives have 5800 horse power each!

Built by the GE Transportation in Erie, Pa., these locomotives are special order built to 5 foot 3 inch gauge!

Because of their 5 foot 3 inch gauge, these locomotives have to ride on flatcars separate from their trucks.

These types of locomotives cannot be used in the United States since they do not meet the new EPA Tier 2 emission requirements. The ES58ACi’s are generally Tier 1 emissions compliant because of their large 5800 horse power, 16 cylinder engines.

The debate is “does a nice large package of horsepower with no increase in reliability justify a 2-for-3 operation”? The idea is to keep trains moving if there is a breakdown of one of the engines.

Let us know if you live near the GE Transportation plant and if you have seen any of these caravans of locomotives headed to distant shores!