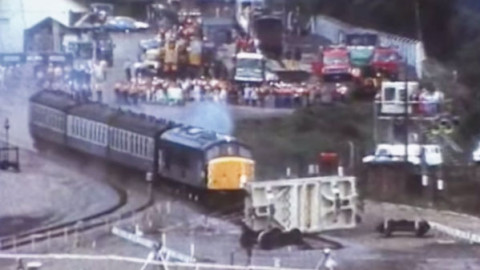 “Operation Smash Hit” proves these containers can take a hit!

In 1984, Britain’s Central Electricity Generating Board (CEGB) staged a 100 MPH train crash to prove that the radioactive containers used to on trains to transport radioactive waste were safe. Called “flasks”, each flask weighs more than 50 tons and has a 15 inch thick steel main body.

The train used for the test was a British Rail Class 46 locomotive and was fitted with an external brake release lever. Once the crew put the train up to full power with the brakes on, they could exit the train safely.

Once off of the train, the crew released the brake lever on the empty train was off!

The location of the test was the Old Dalby Test Track in which the 239 ton train smashed into the flask which was set up on a siding.

The following explosion shows the engine being catapulted forward in dramatic fashion with a cloud of black smoke and flame!

Let us know if you think this type of test was sufficient to test the reliability of the the flasks!