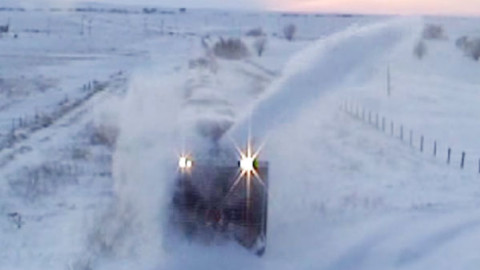 Union Pacific brings out these heavy weights when the snow is too deep or too hard to plow with a push sled. These machines grind and toss the snow more than 150 yards into the air!

This clip shows Union Pacific’s Rotary # 900082 attacking drifts in the Sharon Springs area of Kansas. The engineer can move the train at speeds varying between 4 -6 mph, depending on the depth of the snow.

With 12 foot blades in the front, this turbo charged diesel engine behind the rotary car can power the blades at speeds of up to 150 revolutions per minute. The plow engineer controls both the plow and the trailing locomotives.

Most of the rotary plows in the United States have been retired museums due to the high cost of operating.