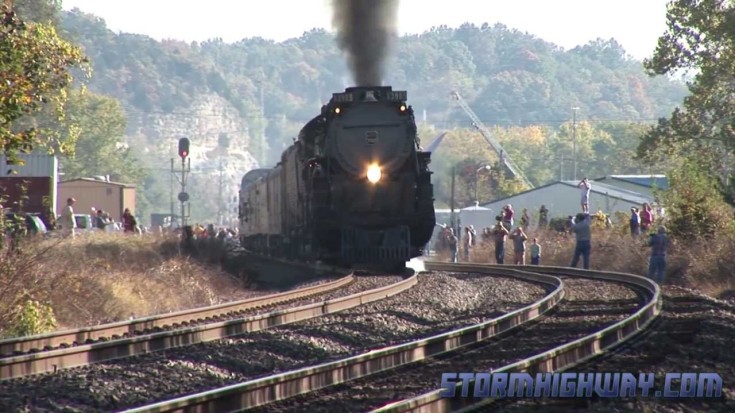 Filmed in amazing hi def, this clip starts out with great footage of Union Pacific’s 844 on the MacArthur Bridge in downtown St. Louis. Her whistle echoes throughout the city as she passes over the old rusted iron trestles out of town. This is followed up by some great scenery as she high balls out in the green countryside at high speed.

At about 1:55 into the clip, you see Union Pacific 3985 high balling through Fults, Illinois on her way to St. Louis. She also goes over the MacArthur Bridge and lets the city know she is town with her whistle blasting as well. The colors in this video are really outstanding and the yellow heritage cars both trains are pulling really stand out.

At about 3:00 into the clip, you get a really great perspective telephoto shot of UP 3985 coming directly towards you on a curve. The gates go down and she follows the track in front of you around the curve. Excellent!

The Union Pacific 3985 is currently the largest and heaviest operational steam locomotive in the world!

Let us know if you have ever had a chance to see either of these locomotives up close and personal! We would love to hear from you!