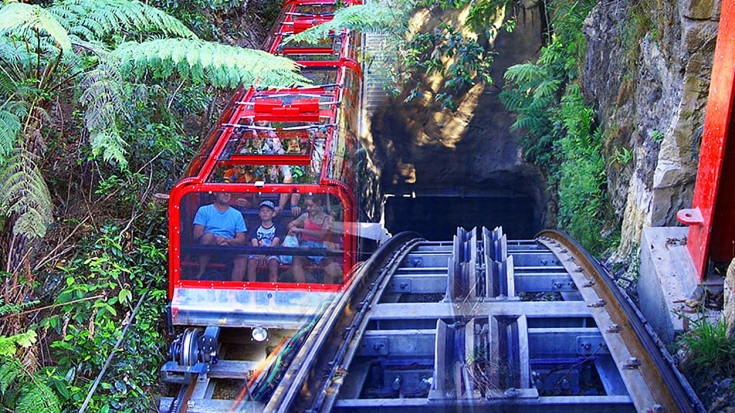 The Katoomba Scenic Railway, Located in the Blue Mountains of Katoomba, New South Wales, Australia, is part of the privately owned tourist attraction: Katoomba Scenic World. About 100 kilometers (roughly 62 miles) west of Sidney, It is the steepest funicular cable-driven railway in the world!

Funicular- a cable railway in which a cable attached to a pair of tram-like vehicles on rails moves them up and down a steep slope, with the ascending/descending vehicles counterbalancing eachother!

Initially developed in the 1880’s, it was meant as an efficient means to transport coal, as well as oil shale deposits, from the depths of the Jamison Valley. With a distance of 310 meters (around 1,017 ft) its steepest incline sits at around 52 degrees!

Both the tracks and carriages were recently upgraded in 2013!

Around 1928 to 1945 it became a tourist attraction, shuttling, as well as exciting passengers on the weekends, all the while continuing its intended purpose of moving raw materials during the Monday through Friday work week. The coal mine closed in 1945 and the railway remains a staple of railfan tourism in Australia to this date.

Have you ever had the opportunity to ride the Katoomba scenic railway, or a different funicular railway? Please let us know, we’d love to hear about your experience!