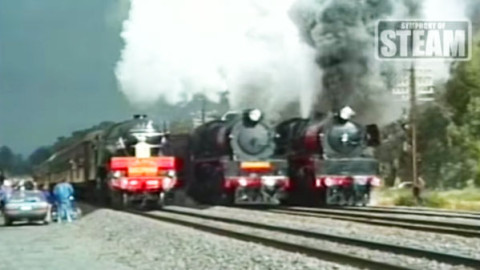 The Australian Stream Festival featured this rare event when they had the British “Flying Scotsman 4472” paired up with their very own Victorian Railways R Class R761 and R707!

Like thoroughbred horse coming out of the gate, these massive locomotive showed they could still bring it when this was filmed.

The “Flying Scotsman” (a 4-6-2) was shipped in for this special occasion from Britain and set a record for a steam engine in 1989 of traveling 422 miles non-stop from Parkes to Broken Hill!


The two Victorian Railways R Class locomotives (4-6-4’s) (R761 and R707) were built by the North British Locomotive Company of Glasgow and were part of a 70 locomotive order.

If youâve ever been to the Australian Steam Festival, let us know in the comments below! Would love to hear your experience. The 2015 festival is scheduled for April 18 and 19, in Maitland, Australia.

Thank you for creating with WordPress.