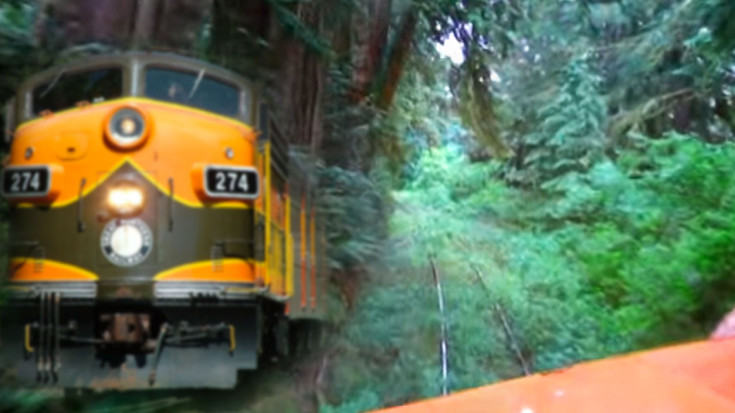 Oregon Coast Scenic Railroad’s Great Northern #274, and Port of Tillamook Bay’s #101 (an EMD F7-A and EMD GP9 respectively) were on route from Batterson to Garibaldi, Oregon. Hauling 2 tanks cars, a side dump full of dirt ant trees, and 3 flat cars, the train was ready to make its way to Girabaldi!

There was however one slight problem, that might cause difficulty for the trains passage.

Certain sections of the Oregonian track between Batterson and Garibaldi are completely covered in plant overgrowth and thicket! Obviously this was no surprise for the railroad, not only did they know about it of course, but as you can imagine this is something that occurs more often in Oregon than in other parts of the country. This of course is due to the northwests heavier and more frequent rains!

Some portions of the track are completely hidden by plant and tree material!

Preliminary brush and tree removal was scheduled and completed before the aforementioned trip by an industrious group with motorcars, and while it did make the trip easier than it would have been, it was still quite difficult.

Due to the wet brush and trees that had to be pushed through one of the six railcars had to be left behind!

Are the tracks near you well maintained, or could they use some TLC? Let us know, we’d love to hear about it!