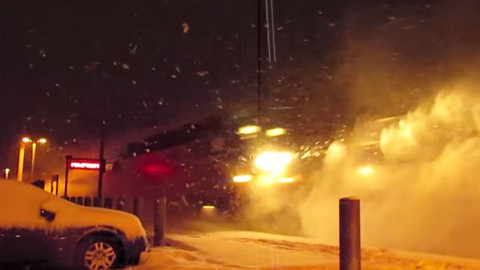 Canton Junction in provides the lighting for this drama on a snowy night!

This railfan managed to capture some really exciting video of these two commuter trains passing each other in high speed at night!

The Canton Station is part of the MBTA Commuter Rail Providence/Stoughton line west of downtown Canton, Massachusetts. The station itself was opened with the Boston and Providence Railroad in 1835.

Imagine standing just in back of the yellow line (if you could find it) when these two trains pass.

Would you be covered head to toe in snow?

Let us know if you have ever been a commuter on a train like this in the snow! We would love to hear about your experience!