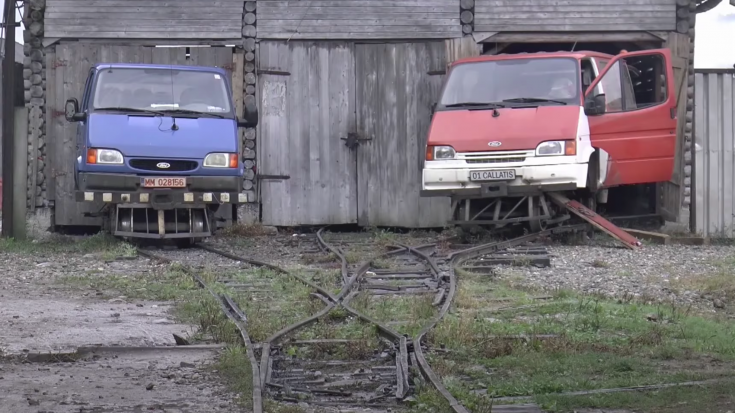 Where can you find mini vans sharing the same railroad as steam locomotives?

The Vaser Valley Railroad is a pre World War II narrow gauge (2foot, 5/5/16 inch gauge) railway built during 1933 to 1935 in the Carpathian Mountains in Romania. It was constructed to primarily serve as a logging railway. It was partially destroyed during WWII and subsequently rebuilt.

Several steam locomotives use the line today as well as an ongoing rehabilitating effort to convert the 26 mile long line into a tourist attraction.

Converted mini vans are used by border police, emergency personnel, and others to get quickly getting up the mountains. They share with the logging railroad.

The owner of this of this converted Ford mini van has the normal ignition, gears, accelerator, but the steering wheel works the brakes! It also carries its own turntable underneath to turn the van around at a moments notice. Amazingly, he connected a car alarm to the signal switch to be used as a horn.

The mini van even has its own cow catcher in the front!

The whole situation is quite hilarious and makes you want to put this adventure on your bucket list. It even has a cow catcher in the front!

Let us know if you have ever seen anything like this. We would love to hear about your experience!