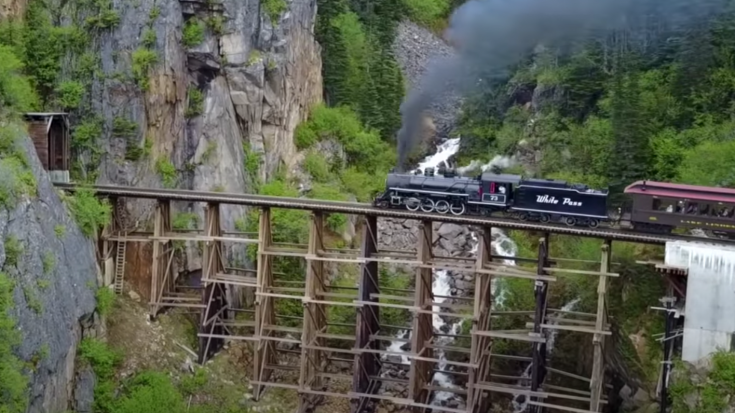 Hard to believe this breathtaking railway was built in just two years!

If you’ve ever been to Skagway, Alaska, you no doubt have ridden this iconic railway out of the port of Skagway up the mountain to White Pass Summit, passing Bridal Veil Falls, Inspiration Point and Dead Horse Gulch.

Built in 1898, the White Pass & Yukon Railway offers 49 mile round trip excursions with some of the most breathtaking views of the the Alaskan territory ever seen. The line starts at tidewater in Skagway and works its way up the mountain crossing wooden trestles, shear rock faces, and culminating at the 2865 foot White Pass Summit and eventually connecting Whitehorse, Canada.

From the vintage railcars, you can view the original Klondike Trail worn into the rocks,” a permanent tribute to the thousands of prospectors who journeyed this way in search of fortune during the great Klondike Gold Rush of 1898.”

Let us know if you have ever had the chance to ride the classic White Pass & Yukon Railway. We love to hear about your experience!