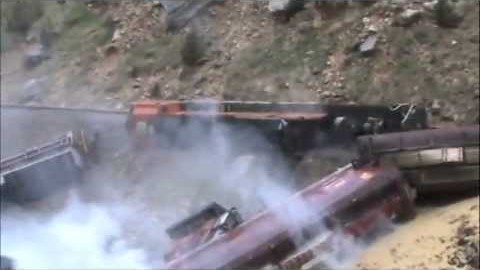 Due to the heavy rains, a BNSF high-railer maintenance vehicle had just gone through the canyon moments before checking the tracks!


While driving their car, these photographers happened upon the scene right after the accident where a 62 car BNSF freight had just been derailed by hitting a boulder the size of a pick up truck that had fallen onto the tracks.

The accident happened along the Wind River about 6 miles south of Thermopolis, Wyoming.


According to a witness from the Wyoming Highway Patrol, the BNSF was notified about the rock slide prior to the accident, but was unable to reach to engineers in time to warn them!

While heading towards Denver, Colorado, the crew of 2 had no time to react and rode their locomotive down into the Wind River along with the other engine and a couple of cars. They escaped by climbing out of the engineers window!

The second engine was torn in half by the collision!

Although the filming is very shaky, you can actually get a glimpse of the drenched engineer climbing on top of his half submerged locomotive in the beginning to the tape. Thankfully, neither the engineer or conductor were critically injured and you can see them dripping wet walking down the tracks trying to “shake it off”!

The engineer and conductor were very lucky to walk away from this with no injuries!