Coal Trains On The Move 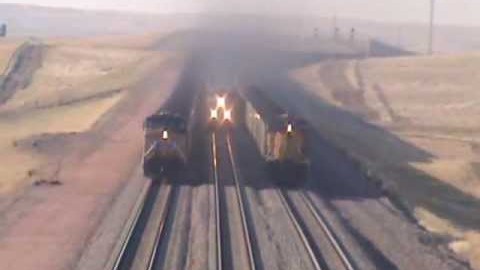 Wyoming and Montana are coal country! Union Pacific and BNSF are there too!


Besides being the largest coal mining region in the United States, The Powder River Basin, covering parts of both Wyoming and Montana, is responsible for over 40% of the coal produced in the United States. The Union Pacific and BNSF take on the heavy burden of transporting the coal out of the region.

There are approximately 14 active coal mines in the Powder River Basin.

This clip is a really interesting shot of 2 outgoing trains loaded with coal on the outside tracks and one returning empty on the middle inside track.

If youâve ever seen these trains up close and personal or a train like this let us know in the comments below! Would love to hear about your experience!