The “War Wagon” Has Met Its Match Of Ice And Snow 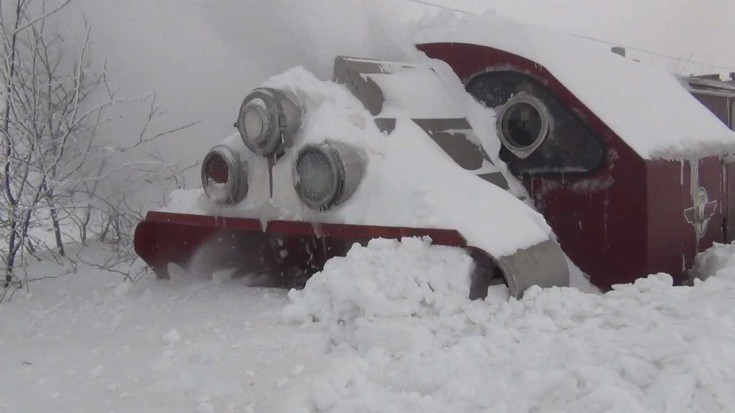 This poor rotary has a long way to go one foot at a time!


Great clip of engine high snow surrounding the rotary blower. Repeated attempts to clear are met with a crust hardened snow pack that just won’t give.

These machines are no lightweights either, with their 11 foot fan blades and separate power sources other than the locomotive.

The idea of the rotary snow plow was first conceived by a dentist in Toronto, Canada back in 1869. The world has since adopted his design such as this plow in Romania. The rotary plow was designed for deeper drifts where a sled plow would be ineffective.

Since rotary plows leave an open-cut in the snow bank, they are the only plow that can be used for the rest of the winter. The sides of the cut set up like concrete which in turn make the regular push plows useless.

The centrifugal force created by the swirling 11 foot fan blades can propel the snow upwards of 100 feet to either side of the unit. Turning at 60-90 revolutions per minute, the rotary unit can normally move around 4-8 mph, acting as a giant auger chewing into snow banks.

In this case, this rotary has met it’s match!