UP Engine Explodes In The Center Of Town! 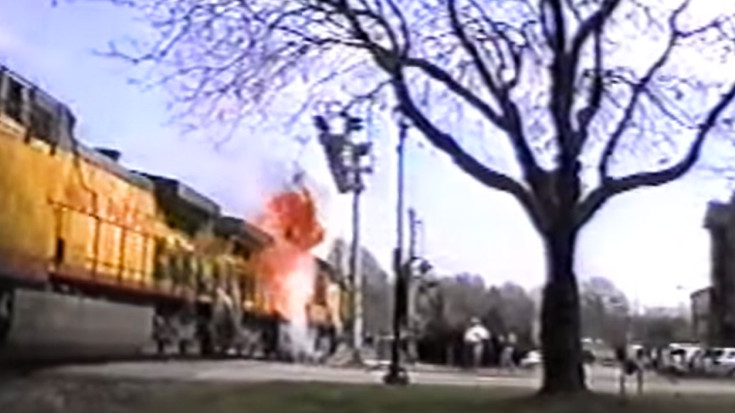 Sometimes when rail fanning you miss the shot you were hoping for. Unfortunately it’s an inevitability, schedules just don’t always match up, and you miss the train you were hoping to capture. Even though it can be disheartening at times, the best idea is to not let your spirits get down and just ride the day out.

Because every once in a blue moon, something really spectacular comes your way!

James Tiroch, Youtuber and railfan experienced one of those days in March of 2006. Hoping to get a shot of the train I-LADU-09 he did everything he could to get out of the house and down to the tracks! Unfortunately for James, upon arriving at his destination, he had missed his train by 5 minutes.

Left sullen by the realization he missed the train, he decided to stay after all, hoping that he might be able to catch some SD40-2’s. James thought he had been let down once more when the AC4400CW with UP 6741 at the head pulled up, but what happened next was about to change his entire demeanor!

“I can’t remember what I said afterwords….the next words I spoke were….’HOLY CRAP!’…”

Just as suddenly as it was shocking, 6741 blew a piston, causing the engine to bellow flames from its side, right smack dab in the center of town! The residents of Kirkwood, Missouri were definitely in for a shock when the passing train suddenly burst into flames!

Even though James didn’t catch the shot he wanted, he still managed to get something pretty amazing, and even ended up on his local 10 O’clock news!

Have you captured any random gems while filming trains that you were not expecting? We’d love for you to share with us!