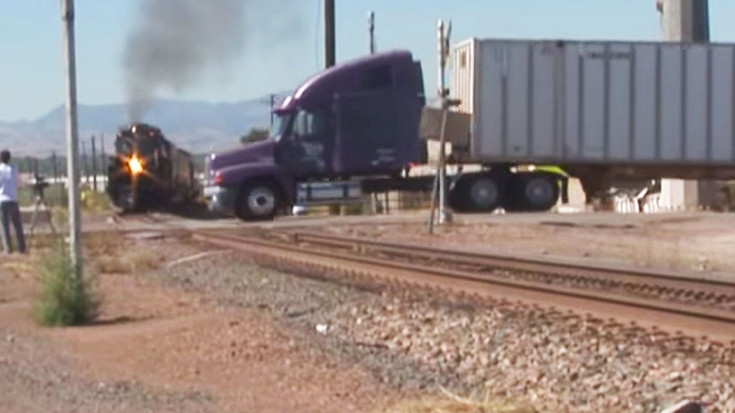 Union Pacific’s Challenger class 4-6-6-4 articulated locomotive is seen up close and personal in this clip!

Filmed in a switching operation in Sedalia, Montana, she was en route as part of six state 2,200 mile excursion from Cheyenne, Wyoming, to Gorham, Illinois. Weighing 1,073,000 pounds, she is an impressive sight matched only by the sound of her steam whistle.

The engines weight alone would have obliterated the 18 wheeler!

The UP Challenger 4-6-6-4 is second only to the UP Big Boy 4-8-8-4 and was designed for fast freight service. Built in 1943 by the American Locomotive Company in Schenectady, New York, this locomotive is one of only two that are still in existence of the 105 originally built.

She is currently housed in Union Pacific’s Steam Shop in Cheyenne, Wyoming. She is line to for her rebuild behind some other classic steam locomotives including UP’s 4014 Big Boy!

If you’ve ever seen the Union Pacific #3985 or a train like this in action, let us know in the comments below! Would love to hear about your experience!