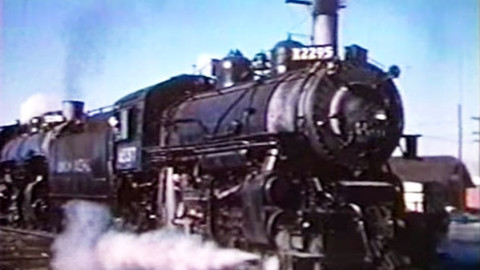 Filmed in various locations, several of the Big Boys 4000 series locomotives are seen hard at work in their hey day pulling heavy loads through the deserts and up Sherman Hill in Wyoming. The middle of the clip shows in terrific detail describing an articulated locomotive and how it was invented to allow longer, heavier engines to round curves more easily.

The Big Boys were conceived to allow one engine to pull longer heavier trains without having to use two engines (called double heading). Weighing 762,000 lbs., the Big Boys could do exactly that! They had boiler pressure of 300 lbs per square inch!

The Big Boys could pull a 5 1/5 mile train on level ground!

The American Locomotive Company manufactured a total of 25 Big Boys 4000 series during the war years of 1941 through 1945.

Let us know if you are a Big Boy fan and would like to see #4014 after she has been restored!