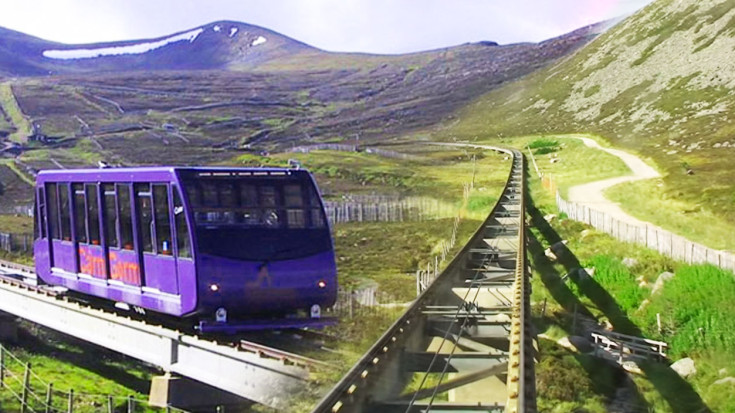 This funicular railway allows for gorgeous panoramic views of the Scottish countryside!

The Cairngorm Mountain Railway, with a reputation of being the highest railway in all of the United Kingdom, climbs the northern slopes of Scotland’s Cairn Gorm. At a height of 1245 meters (4084 feet) Cairn Gorm is the sixth highest mountain in the UK!

One of the more modern funiculars built, the Cairngorm Mountain Railway saw its construction begin in 1999, and opened in 2001, serving to replace the White Lady Chairlift. The chairlift, previously the only way to easily ascend Crain Gorm was far too sensitive to the strong winds of the area, and thus too dangerous for usage.

The funicular was created to combat high winds, and depending on certain elements, the trains can operate in winds of 100 to 120 kph (60 to 75 mph)! With a maximum operating speed of 36 kph (22mph) during ski season the trip takes around 4 1/2 minutes, however in the off season the trip takes roughly 9 minutes, as the maximum operating speed is halved to 18 kph (11 mph).

Have you had the opportunity to ride this glorious funicular or one similar to it? Let us know, we’d love to hear about it!