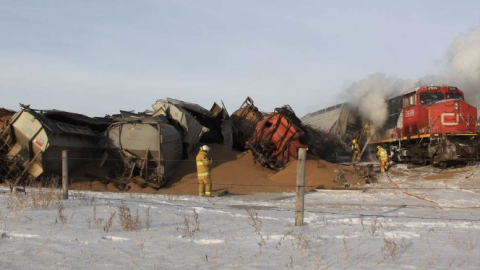 Dashcam captures the moment of derailment on this CN freight!

“We have a fire that’s flowing. The liquid fuel, the diesel, is actually flowing and igniting at the same time so it provides some additional challenge to control that,” Saskatoon Fire Department Assistant Fire Chief Wayne Roger said.

This derailment of a 52 car Canadian National grain train occurred on Highway 11 near the town of Warman, Saskatchewan, Canada.

30 cars of the 52 car freight derailed as drivers stopped at the crossing looked on in disbelief! The first indication something was wrong was the snow that the cars were kicking up and then the derail happened.

A few of the drivers hightailed it out of there!

Luckily there were no injuries among the train crew or drivers that were waiting at the crossing. The leaking fuel from the locomotives proved to be a bit of a challenge for fire fighters, but they got it under control.

Let us know if you think the situation could have been much worse than it was. We would love to hear your comments!

Note: There is no audio for this clip.

War Wagon On The Donner Pass

Blizzard Conditions For UP Intermodal