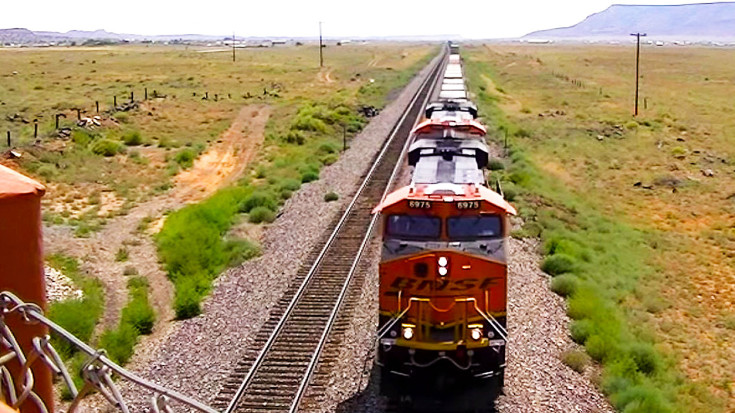 BNSF’s Southern Transcon is one of the most heavily trafficked rail corridors in the western United States!


This is just great relaxing freight train action in the wide open spaces of New Mexico. It is shot from the Old Route 66 overpass at Highland Meadows, west of Albuquerque, New Mexico. The visibility in either direction is 5 miles on a clear day. This railfan makes great use of his camera and editing to bring us the best of the freights as they pass by. The frequency of the trains was about 15-20 minutes in either direction.

Condensed down from one hour, 7 trains including an Amtrak whiz by on two parallel tracks. Most are intermodal freights with double and single stacked containers including auto racks and truck trailers.

The clip ends with a massive tank car freight train with tank cars as far as the eye can see!

The average length of a BNSF crew district today is approximately 220 miles.


“It’s a different kind of life,” he says. “You live in hotels half of the time. You’re on the road on Christmas, Easter, Thanksgiving. It’s a 24/7 business and so you often eat at odd hours. Sometimes there’s just one place to eat at 3 a.m., but the railroad provides a great life. I wouldn’t know what else to do.”

The BNSF Southern Transcon carries over 90 trains daily over the section between Belen and Clovis, New Mexico, with average train length running between 6,000 and 8,000 feet in length!

Let us know if you have are a railfan and have seen freights on BNSF Southern Transcon! We would love to hear about your experience!

Nothing Wrong With These Tracks …..

NKP 765 On The Horseshoe Curve