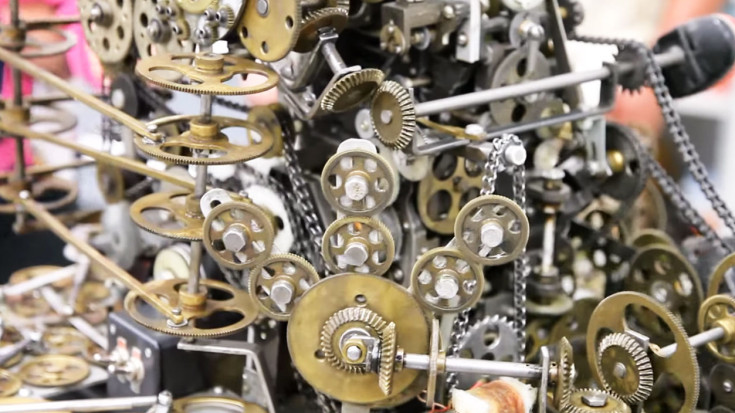 The “Do nothing machine” has all the parts and then some!

Watch closely and you can see the intricate parts moving in harmony with each other, much like the driving wheels on steam locomotives!

Built by Lawrence Wahlstrom, his “Do nothing machine” makes us appreciate the relative simplicity of a boiler, plus tubes and steam cyclinders!

Located at the Craftsmanship Museum in Carlsbad, California, the retired clock worker came up with this invention much like the dentist that came up with the idea of an articulated locomotive.

This amazing machine was born out of the idea that “people would rather be entertained than educated”, according to Mr. Wahlstrom.

Over the years, he kept adding onto this creation and the number of gears grew to over 750!

He originally called it the “Flying Saucer” detector, and it was featured in magazines in the early 1950’s including Life Magazine. Having started his project in 1948, he spent the better part of 15 months adding gears, switches, and rotating parts!

Note: At 2:30 into the clip, they also feature a very interesting short demonstration of stationary engines by Rudy Kouhoupt.

Let us know if you are a creative genius also or have ever been to this museum! We would love to hear you comments!