Flames Rise On NS Engine When Traction Motor Burns Out! 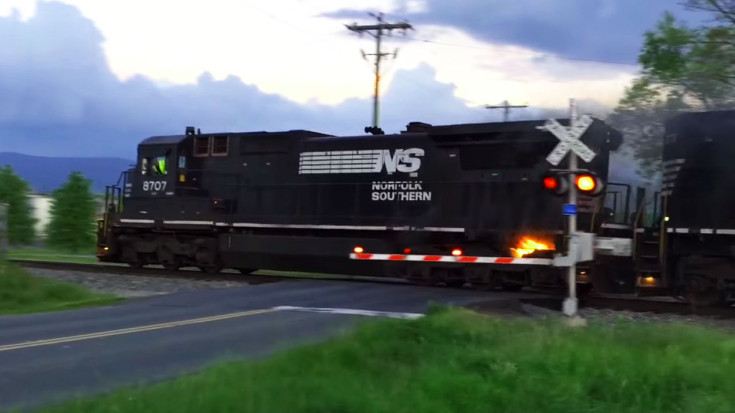 You’re never quite ready when an engine catches fire!

Railfan youtuber RollThunProd caught something rather unexpected after spending a day following this Norfolk Southern train around Virginia! After capturing some successful shots, and even catching the NS 16T (lead by #8707) meet with NS 37Q in Stuart’s Draft, It’s doubtful that RollThunProd knew what would come next!

As the day grew later and the light faded, the determined railfan found himself in the Shenandoah Valley area of Virginia/West Virginia. Suddenly NS #8707, a GE Dash 8-40C caught fire as one of its traction motors burns out!

Traction motors, the motor that actually propels diesel-electric engines was on fire, and that spells trouble! Traction motors most commonly burn out when they too many amps are drawn for too long. This usually occurs when a locomotive is running speeds too low to compensate for the amperage draw. Ultimately overheating is what does these motors in, and multiple episodes of overheating can also cause the motor to burnout over time!

No matter the reason, trains catching fire is almost always an unsettling experience!

Have you operated or seen an engine whose traction motor had failed? Tell us about it!