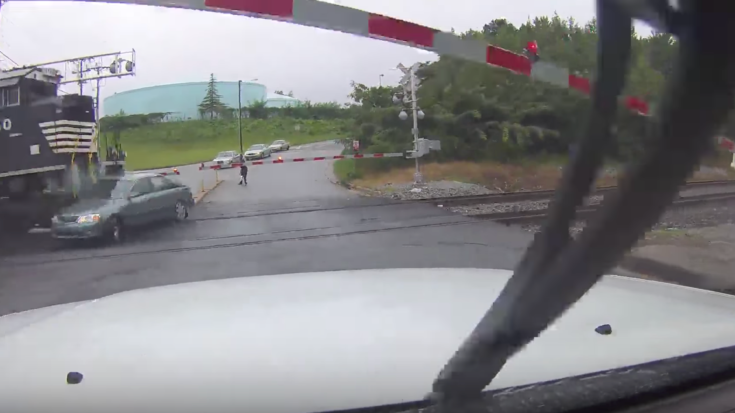 Woman leaves car on the tracks at the last second!

A confusing set of events led to this woman abandoning her car on the tracks at the last minute to save her life as the freight train approached the crossing in High Point, North Carolina.

Traffic waits for the gates to go up after an Amtrak train had just whizzed through the double crossing. You can see the gates go up and traffic starts to move forward. With barely enough time for one car to get across the tracks, the gates come down again. Remember, the flashing lights were on the whole time. Next, the gates come down again trapping this confused and terrified motorist. She panics, gets out of the car and runs to safety.

Did you know that you don’t proceed even if the gates are up but the lights are still flashing? This occurs where there are double sets of tracks.
Look both ways, always!


The most amazing thing about this incident is that, according to police, the driver left the scene and since there was property damage, she could be charged with HIT AND RUN!

This would be the first time in history someone is hit by a train and is charged with a hit and run!


Let us know what you think about this whole affair. Do you with agree that it is a hit and run offense?