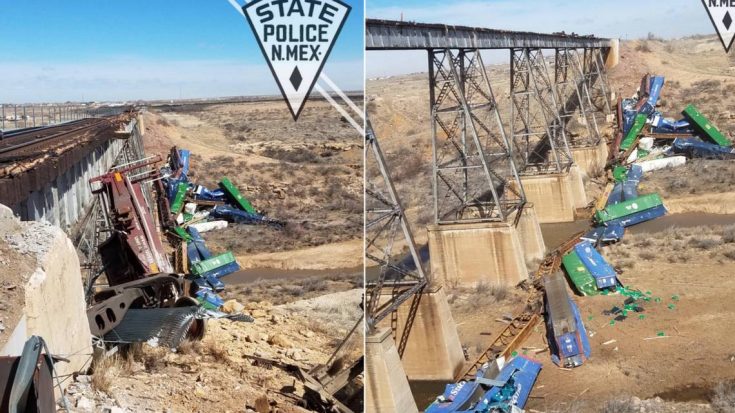 This looks nasty. A total mess. The local community was shocked to see the wind got so strong it could knock all these rail cars off.

According to the state police department of Logan, New Mexico 26 cars have derailed near the 469 Highway due to crazy high winds. The National Weather Service sent out a warning the day the crash happened that the wind speeds we’re some of the strongest winds in the area in many years (58-84 miles per hour).

Logan Fire Chief Rex Stall told ABC News it was around 11am when the incident occurred and the Fire Department and EMS were immediately notified to get to the scene. Luckily no one was reported to have been injured, the cars were fortunately empty but many hazardous materials had to be cleaned up. Take a look at the images below taken by the New Mexico Police Department shared on Twitter.

State Police on scene of a #trainderailment on SR 469 near Logan, NM involving 26 rail cars. No injuries reported. Wind was contributing factor in crash. pic.twitter.com/Qp6pzr0ee1

The train was crossing over the Canadian River Bridge when a strong gust of wind pushed only the tail end of the train off the bridge. Railroad company Union Pacific’s spokesperson Raquel Espinoza said 26 cars fell off the bridge out of a total of 73 rail cars being pulled by two locomotive engines. The bridge constructed in 1954 took some heavy damage as well that’s made it non-operational until the railroad repair team can get in there and rebuild it.

What a miracle no one was hurt and that it didn’t flip the other 47 cars over. Especially the two engines that had men in them. That could of been real bad. The wreck also stopped traffic for around an hour on Highway 469 but was quickly back to flowing as usual. Never has this happen before in the community of Logan, New Mexico so everyone was a bit in awe.