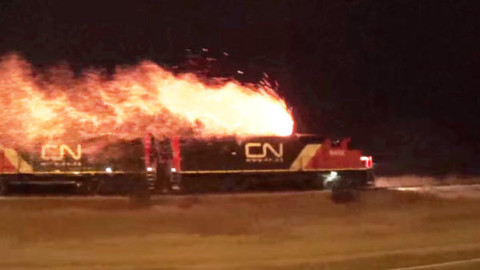 When diesel locomotives flame up, they scare people!


These two rail enthusiasts call 911 after witnessing the CN locomotive flame out!

You can hear the shaken voices of these two railfans as they pace along side the train watching the sparks fly and eventually the eruptions of flame coming out of the top of the CN locomotive. This all happened with the pitch black night as a back drop which made the whole affair even more dramatic!

With sparks flying everywhere, it is easy to see why these two used more that a few expletives while they were witnessing this event.

When a fire breaks out in a locomotive, the cause can be electric, oil, or fuel related.

In this case, if the fire is being fed by consuming its own lubricating oil from the sump, it just keeps burning and the engine keeps running (like a runaway) until it is all gone. At this point, the real danger is blowing a piston or rod which would be catastrophic.

Locomotives are considered a rolling hazmat to firefighters with a fuel tank capacity of 5,500 gallons of diesel fuel, 410 gallons of lubrication oil, and 380 gallons of cooling water.

In this case, the engineer did the appropriate thing by slowing down and coming to a stop. The next step would have been to shut the entire engine down including the electrical system.

The bottom line, putting out a locomotive fire is a very delicate process for firefighters!


Let us know if you have ever witnessed a “flame out” of a diesel locomotive or have ever seen anything like this in person. We would love to hear about your experience!