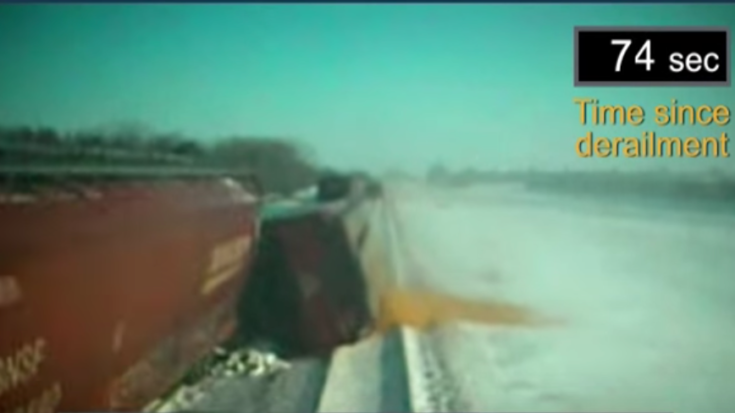 National Transportation Safety Board releases most likely cause of derailment!

Two BNSF trains, one grain consist and one oil, collided just outside Casselton, North Dakota, on 12/30/2013. The actual camera footage as well as the voices of the engineers can be heard along with the speed and distance read outs from the time of the derailment of grain train #6990 and the actual collision of the oil train #4934 passing in the opposite direction crashing into derailed grain car #45.

There was only one buffer car between the crew of the oil tank cars when the engine collided with grain car #45 at 42 MPH.

This in turn caused the additional derailment of 20 oil tanks car, 18 of which ruptured and caused 476,000 gallons of crude to spill and ignate..

Fortunately, all crews made it out alive and the NTSB is considering requiring additional buffers cars to protect crews hauling hazardous materials as well as strong reinforced steel on tank cars including more insulation to keep them from “cooking off” in the case of an accident.

Let us know what you do to protect the crews. We would love to hear your thoughts!